Kingham Hill Racing gives pupils from 1st - 6th form the opportunity to experience the thrill of motorsport, and basic engineering. The team currently competes in the National Schools Karting Association series (NatSKA), although our top driver is also a Junior British ROK champion.

Pupils new to the sport can apply for a novice seat in one of the KHS fleet. They will normally undertake 4 novice events, before being allowed to compete from the back of the grid in a race, and then going on to qualify for a full licence.

Pupils travel to NatSKA race meetings all over the country, at MSA-approved tracks with stringent scrutineering and safety procedures. The climax of the season is the 3-day Nationals, which is the culmination of the championship in each kart class, along with a sprint championship.

US pupils at KHS are able to gain STEM diploma credit through participating: through mechanic support in the workshop and on race days, as well as driving themselves! 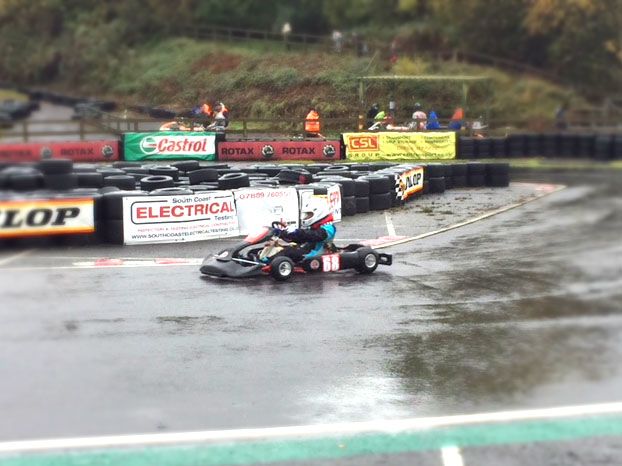 NatSKA worked wonders to rearrange dates given the pandemic, and even managed to get a race meeting at Shenington: the first time in 33 years! Wet tyres were the order of the day at both events; the heavens opened after Heat 1 on the Monday, and didn't close again until well after the final heat on the Saturday.

Whilton Mill saw a comfortable triumph for AJ Arnold on his home track, winning the first three heats and putting his feet up early. Dougal Hamilton-Smith proved a revelation in the wet, and was faster than the TKMs, let alone the competitor Hondas, for the last three heats, giving him the overall win. Cayetano Dare Ruiz picked up the trophy for Cadet Novice of the day, and there was a super result for Sam Seward, whose steady consistency in the rain gave her 3rd place in Class 7.

That form continued at Shenington, as Samantha picked up a win in heat 1, but only in the most bizarre circumstances! AJ suffered a collision in the formation lap, managed to get going again, and was half a lap down when race control put the lights out, mystifyingly - there was no false start. Brilliant driving saw him make up all that ground, and lead comfortably approaching the chequered flag; a mechanical failure stopped him 50 yards from the line! The pressure was then on, but he won the remaining heats, and KHR finished with a 1-2 in Class 7; the championship is now AJ's to lose. Dougal couldn't quite repeat his stellar performance of Monday, but gained the 3rd place trophy, and still leads the way in Class 12.

Of our other Honda drivers, James Thompson successfully navigated his back-of-grid races and consistently made up places: he'll be gridded from Camberley. Cayetano joined the back of the grid of Class 4 at Shenington and continues to get faster. Deven picked up a place trophy at Whilton Mill but had a rush of blood on the Saturday. Sofia, Henry, Laurie and Seb all stayed on the black stuff: long may it continue!

Thank you to catering, parents and supporters again; we have a test day with Quinton House back at Sheny on the 21st, and will be chasing silverware again at Camberley at the end of the month.

'Even better if' award - James Thompson: watch out for those crazy Class 11 pirates!

An early start meant we got the prime spot in the paddock to set up for the full team. In contrast to our last outing, conditions were dry until nearly the end of racing. It was just the novices who got the benefit of brushing up on their flags; red and yellow stripes are now imprinted on their minds as meaning changing surface conditions! 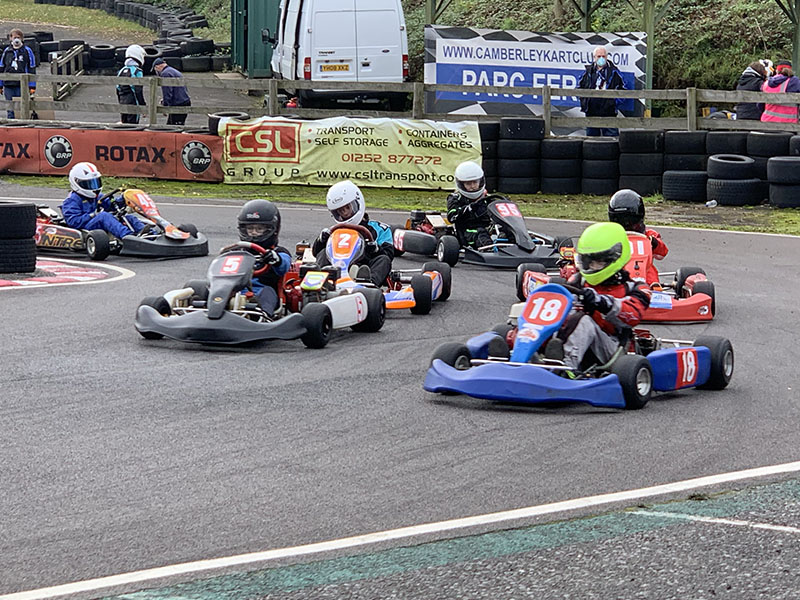 Another outstanding day saw Dougal Hamilton-Smith pick up first place in Class 12, to go into the lead in the championship. Helped by a mechanical failure of the leader in the last heat, he nonetheless took full advantage (that's racing), sweeping home to pick up the overall win. AJ Arnold had a day of frustration with brake bolts, but 3rd place in Class 7 keeps him well in the hunt. Samantha Seward showed her usual consistency and is closing on the pace of the leading pack. In Class 11, it was a day to learn from for Deven Trotman, but Josh Behan raced well after not making it out for Heat 1 (broken pull cord). 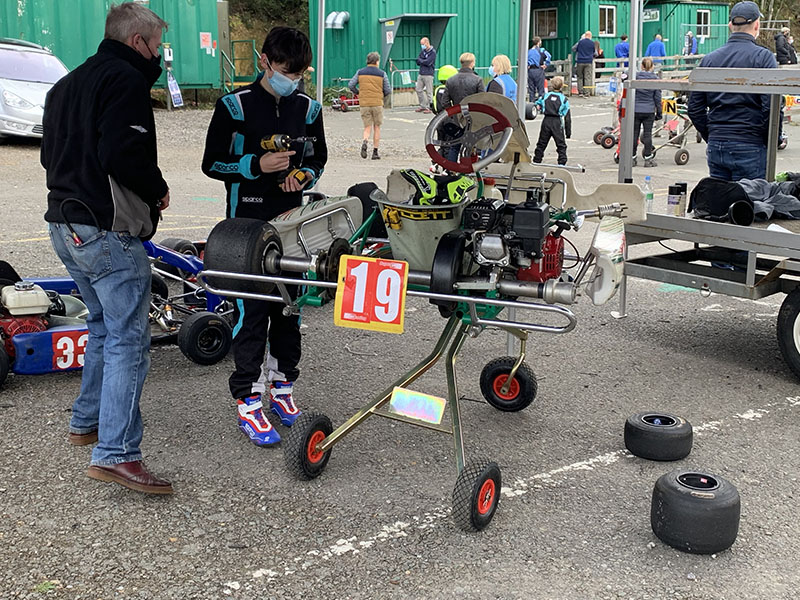 A great day for our novice racers: all were consistent and made full use of the extra time on track given by NatSKA as the day was ahead of schedule. James Thompson was quickest in the first two heats, whilst Laurie Wessel and Drew Lobo battled a big field well. Cayetano Dare Ruiz was awarded Novice of the Day in the cadets: silverware on his second time out! 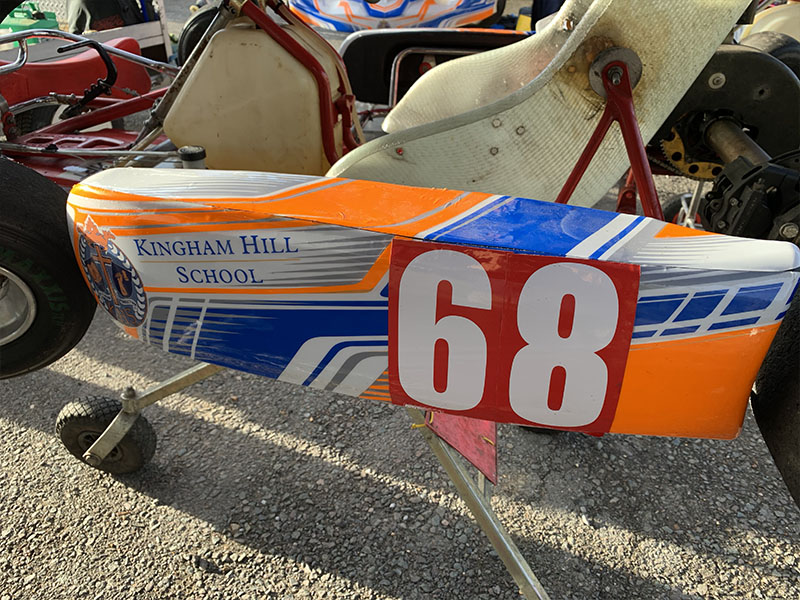 Thank you again to staff and parents: we couldn't do it without you.

'Even better if' award - after doing a Geoffrey Boycott impression for most of the day, it was chasing a driver in front that got Cayetano his improved pace. Get on that racing line!

With NatSKA deciding that the championship points would start after the first meeting, we returned to the same track, but in very different conditions. It poured with rain throughout the event, presenting a great challenge to our novice drivers; the slick tyres stayed in the van, and wets were the order of the day. 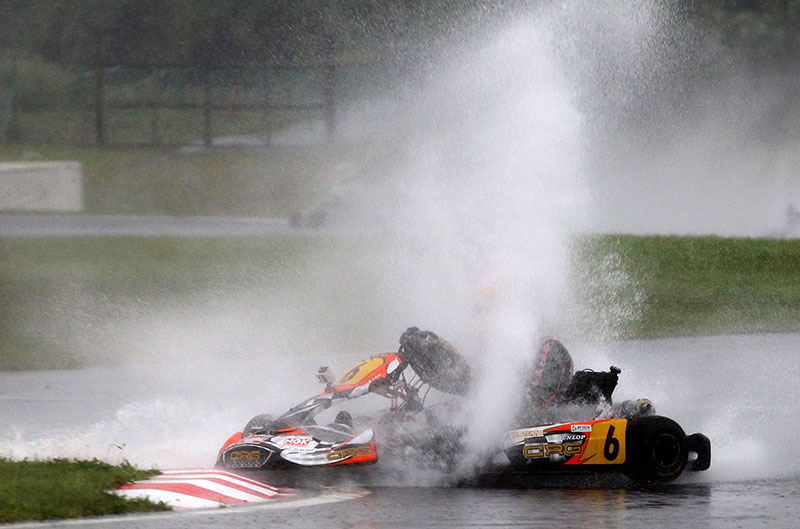 AJ Arnold got a very solid 1st place under his belt, to move into an early championship lead in Class 7. He won his first 3 heats convincingly to ensure an early win. Further back the field Samantha Seward came 5th to secure some good points at the start of the season. Dougal Hamilton-Smith had an outstanding day in Class 12, showing real capability in the wet, some clever overtaking, and times as quick as some of the faster engines; it was good to see him on the podium. Sadly, after his podium last time out, poor old Deven Trotman had 'one of those days'! A wheel bearing went, a wheel came loose, and he had an attack of the 'spins' in a couple of heats. That's racing, sometimes.

Our Class 11 novices James Thompson and Laurie Wessel drove consistently all day, and well done to Cayetano Dare Ruiz, making his debut for the team in the Honda Cadet in Class 4 novice.

Thank you to the parents who braved the downpour to help, and again to Mr Marton, Mr Arnold, and Mrs Thatcher for tending to both mechanical and culinary needs!

'Even better if' award - If Deven Trotman can keep it pointing in the right direction, he's a champion in the making! 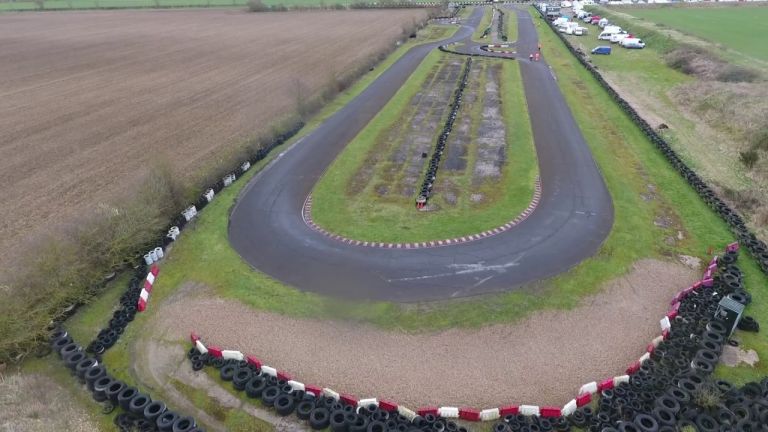 The team set off for a first competitive NatSKA meeting since March; little did we know that Bayford Meadows would be the last time on track before the disruption caused by COVID. A beautiful sunny day in a flat Lincolnshire vista meant perfect racing conditions, with no need for wet tyres!

Last season three KHS drivers achieved 2nd place NatSKA championship finishes in their respective classes, and all were in action. Deven Trotman moved up to Class 11, and drove excellently to come 2nd overall on the day. Samantha Seward, driving a TKM for the first time, performed very creditably in a strong Class 7 field. Further up the same track AJ Arnold was having struggles with engine issues, but still managed to bring home a 4th place trophy. Josh Behan won his first Class 11 heat (ahead of Deven), but sadly a crash and an injured wrist curtailed his day. Dougal Hamilton-Smith, moving up to Class 12, showed great controlled driving, and will clearly be a competitive force as the season progresses.

Class 11 Novices James Thompson, Laurie Wessel, and Drew Lobo came through relatively unscathed, although the latter discovered that his steering problem was due to a bent track rod resulting from one of a number of departures from the tarmac!

Thanks from the team go to Mrs Thatcher for the delicious packed food, Mr Arnold for his tireless efforts to keep the karts going, and Mr Marton for all his hard work in preparation for the meeting.

KHS Driver of the day - Deven Trotman's 2nd place, including an excellent heat win 'Even better if' award - The Class 11 Novices for demonstrating how NOT to assemble a new trolley! 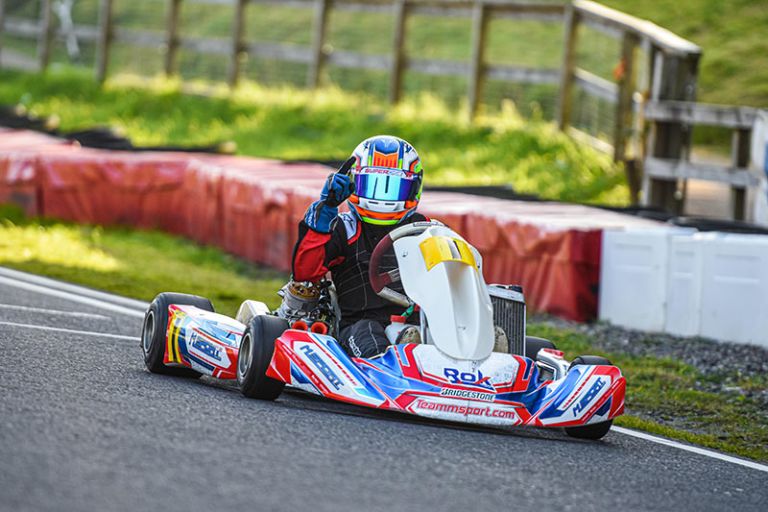 Congratulations to Kingham Hill pupil A J Arnold who this weekend became the Super One O' Plate champion in the Junior ROK class. Congratulations AJ!